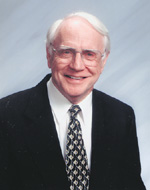 Robert Shannon, a retired preacher living in North Carolina, began preaching at the age of 16. He has preached in churches in Kentucky, Tennessee, Ohio, and Florida, his longest ministry at First Christian Church of Largo Florida. Now in semi-retirement, he has preached regularly for churches in North Carolina and Tennessee. He has also contributed to kingdom work as a missionary to Eastern Europe and as a Bible College professor. He is past-president of the North American Christian Convention. Bob is the author or co-author of several books.

Robert C. Shannon
At the first exhibition of modern art a critic said negatively, "These are nothing but impressions." The criticism became, unintentionally, the definitive description of one kind of art, and today impressionistic art is well known and appreciated. Some think the name Christian came about in a similar way. They think it was coined by the...

Robert C. Shannon
The biggest gold nugget ever found was uncovered in Australia. It was one and one half meters long, weighed 300 kilograms and yielded 93 kilograms of pure gold. That one lump of gold would be worth one million Australian dollars today. Historically, South America was the world's biggest gold producing region, followed by...

Robert C. Shannon
In 1752 England went from the old Julian calendar to the new Gregorian calendar. In order to make it fit, eleven days had to be removed from the calendar. People went to bed on September 2nd, and when they awoke the next morning it was September 14th. There were riots in the streets. People said the government had...

Robert C. Shannon
Recently an American archaeologist, Arthur Demerest, was in Guatemala walking across what he thought was a hill. He fell through the heavy vegetation and nearly fell in to the courtyard of an ancient Mayan palace covering 26,000 square yards -- the size of two football fields. The ruins are littered with jade, and there is...

Robert C. Shannon
Recently the body of Ethiopia's King Haile Selassie was reburied. He had claimed to be descended from King Solomon and the Queen of Sheba. He was revered as a god by the Rastafarian sect. During his lifetime he was called The King of Kings! A few years ago the Shah of Iran Was deposed in a revolution and shortly...

Robert C. Shannon
It sounds like a story someone made up, but the story is true. In 1890 in the Australian Supreme Court a witness testified that he saw a lady fall in the street. But he testified that he did not help her because they had not been properly introduced! Victorian manners cannot have been that strict! You and I have been "introduced"...

Robert C. Shannon
A Canadian television station put together an eye catching promotion in an effort to attract more viewers. They showed several news clips with the wrong dialogue. Then a man said, "We don't make the news. We make up the news!" Preachers and teachers do not make up the Good News. It was revealed by God, exhibited in...

Robert C. Shannon
While most flowers bloom only in the day, some bloom only at night. The night blooming Cereus is the most well known example. The flower called Four O'clock opens in the late afternoon. Moon flowers unfold at dusk and close with the first rays of the morning sun. But Lilies remain open night and day. Is this the reason the lily has...

Robert C. Shannon
In 1991 writer Rick Bragg published an article in the St. Petersburg Times (Florida) newspaper about Miami's homeless. He interviewed a group that lived under the Interstate 395 overpass. They lived in makeshift shelters formed from cardboard boxes and put their mattresses on the dusty ground. They were fed and clothed...

Robert C. Shannon
On the twelfth of September 1683, the Turkish army was finally turned away from the city of Vienna. Among the things they left behind were the cannons with which they had bombarded the city through the long siege. The people of Vienna decided that those cannons could be put to a better use. So they melted them down and...