True to the cross of Jesus, Christian persuasion has to be cross-shaped in its manner just as it is cross-centered in its message.

1 CORINTHIANS 2:1–5: The Cross and Apologetics

When I came to you, I did not come with eloquence or human wisdom as I proclaimed to you the testimony about God.For I resolved to know nothing while I was with you except Jesus Christ and him crucified. I came to you in weakness with great fear and trembling. My message and my preaching were not with wise and persuasive words, but with a demonstration of the Spirit’s power, so that your faith might not rest on human wisdom, but on God’s power.

Some critics take these verses to mean that Paul made a mistake in Acts, realized his error, and is now vowing to preach only the cross. “Apologetics!” these critics scoff. “Paul swore off all that apologetics nonsense and decided to preach the gospel alone.” Once this passage is read in context, however, it becomes clear that far from serving as an anti-apologetic proof-text, it actually has important implications for how apologetics should be done.

Throughout the book of Acts, Paul’s ministry is upheld as a model, and there is no indication that the many instances of persuading and reasoning with nonbelievers are an exception to that model. Paul demonstrates both in his own ministry and in his instructions to others that he values various forms of persuasion. In his second letter to the Corinthians, Paul writes, “Since, then, we know what it is to fear the Lord, we try to persuade others” (2 Cor 5:11). It’s not persuasion that Paul shuns in 1 Corinthians 2, but rather a certain type of manipulative persuasion.

In 1 Corinthians 2, Paul alludes to a movement of his day known as sophism. Sophists were rhetoricians who maintained public careers based on their ability to speak and follow oratorical conventions. It is difficult in our day to grasp what an idol oratory had become in the Mediterranean world. Rhetorical skills were valued to such an extent that “public speakers who either could not meet [the sophists’] standards, or who for any reason chose not to, were viewed as seriously inferior.”

It was in this context that Paul spoke against “eloquence” and “human wisdom.” He refused to allow the gospel message to be judged by the speaker’s rhetorical ability. In Lystra, a city outside of the sophists’ influence, Paul was distressed to discover he spoke so persuasively that he was praised as Hermes, the Greek god of communication (Acts 14:12).As New Testament scholar D. A. Carson writes,“What Paul avoided was artificial communication that won plaudits for the speaker but distracted from the message . . . [Paul’s words] warn against any method that leads people to say, ‘What a marvelous preacher! [or apologist!]’ rather than, ‘What a marvelous Savior!’”

In this letter to the church in Corinth, we learn an important lesson. In order to win people to the gospel, Paul was willing to be flexible in his persuasive efforts (e.g., 1 Cor 9:19–23).However, his flexibility was not unlimited. Paul vigilantly guarded against anything that might jeopardize the gospel message.

This explains Paul’s objection to the use of “eloquence” and “human wis- dom.” Yet the issue raised by the critics mentioned above is not only how Paul spoke, but also what he said. Paul appeared to place severe limits on the message Christians are to preach: “For I resolved to know nothing while I was with you except Jesus Christ and him crucified” (1 Cor 2:2). However, common sense reveals that Paul was not prohibiting any message that was not about Jesus’ death. In this very letter to the Corinthians, he discussed a wide array of topics, including sexual immorality, marriage, singleness, worship, spiritual

gifts, speaking in tongues, and the Lord’s Supper.

Paul wasn’t saying the cross is all that matters. He meant that everything matters only if viewed through the lens of the cross.Rather than negating apologetics, these verses in 1 Corinthians reveal the proper foundation for apologetics and should guide its focus. They show that the goal of apologetics cannot simply be intellectual respectability or a defense of theism, as if belief in any deity will do. The goal of apologetics must be the cross. Apologetic appeals using historical evidence, logic, desire, story, experience, and imagination are important, but they must not become of first importance (cf. 1 Cor 15:3). They should serve to bring people to what is of first importance—namely, the cross.

The cross, a symbol of humility and suffering, should shape the way we do apologetics. Paul reminded the church in Corinth, “I came to you in weakness with great fear and trembling” (1 Cor 2:3). Instead of masking his weaknesses with triumphalist proclamation or a forceful personality, Paul spoke with transparency, a natural outcome of humility.This point will be developed later, but for now it is enough to observe that Paul did not see his weaknesses as things to hide, but rather as opportunities to boast in the power of God.

We must also remember that our appeals are only made effective “with a demonstration of the Spirit’s power, so that your faith might not rest on human wisdom, but on God’s power” (1 Cor 2:4–5). Apologetics inevitably goes wrong when it relies on a system, a rhetorical style, or a charismatic personality rather than on the power of the Spirit. When the faith of a new disciple is wrapped up in anything other than the gospel and God himself, danger looms. This is why the implications drawn from 1 Corinthians 2:1–5 and Paul’s emphasis on the cross serve as a centerpiece for this entire book.

Throughout the book, we will refer to the cross as a synonym for the gospel, just as Paul often did (see 1 Cor 1:16–27; Eph 2:16; Phil 3:18). Paul seems to have chosen the word strategically, not to exclude Jesus’ life and resurrection or to imply they were less important than his death, but to emphasize the scandal of the gospel—to emphasize how the wisdom of God transcends human wisdom. Similarly in our title, Apologetics at the Cross, we do not exclude other dimensions of the gospel, but instead we imitate Paul in using the cross as a substitute for the word gospel.

Because it is important to consider the full biblical framework and not simply mine the Bible for apologetic nuggets, in the next two chapters we will highlight points that occur throughout the biblical storyline. Though the Bible was revealed progressively—meaning the story unfolded over time—today we have the whole biblical narrative from start to finish. Thus, we can understand not only isolated events but also the structure that holds the Bible together. We know the purpose of the story. At the center of this grand narrative, at the heart of its purpose, is God on a cross, God gloriously rising from the dead. Jesus Christ was God himself in human flesh. Crucified. Dead. Buried. Risen. Ascended.

In the next two chapters, we will take an inductive approach to the biblical text, allowing the Bible to speak for itself about how apologetics should be done. As you read these chapters, you will see that the Bible has its own highly con- textual approaches to persuasion. We’ve arranged these approaches into fifteen categories. If the biblical narrative were a play, we might call these categories apologetic “performances” that demonstrate how the Bible does apologetics.3 Because we’re convinced that living in the world of the Bible with cross-colored lenses is a vital foundation for apologetics, we will spend more time than many introductory apologetic books do on this biblical background. 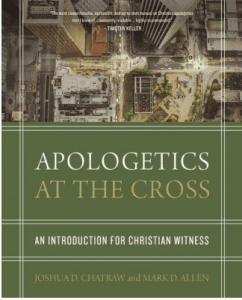 About the Authors:
Joshua D. Chatraw (PhD, Southeastern Baptist Theological Seminary) serves as Executive Director of the Center for Apologetics and Cultural Engagement and as Director of the Theology and Apologetics programs at Liberty University. Coauthor of Truth Matters and Truth in a Culture of Doubt, Chatraw has served in pastoral ministry and is a Fellow with the Center for Pastor Theologians.

Mark D. Allen (Ph.D., University of Notre Dame, D.Min. Gordon-Conwell Theological Seminary) serves as the Chair of Liberty University’s Biblical and Theological Studies Department and the Director of the Greek Program. His Ph.D. from Notre Dame focused on Christianity and Judaism in antiquity and his dissertation dealt with Old Testament critical scholarship. Mark brings twenty years of church planting and pastoral experience.