If you think about it, life wasn’t fair to Jesus. He was perfect in every way. Jesus loved the unlovable. Healed the hurting. Cared for the outcasts. Touched the untouchables. If we look at his story from God’s vantage point, Jesus could make the same argument we make: life isn’t fair.

So when you hurt, when you question, when you burst out in righteous confusion or anger, you may find comfort that God understands: life is not fair.

Most of us probably don’t think much about the pain and anguish that God the Father surely experienced at this loss. Certainly, I don’t want to project our human emotions onto God. But since we are created in his image, and because we can see how God responds to his people throughout Scripture (expressing love, jealousy, and compassion, to name just a few emotions), I don’t think it’s a stretch to say that God suffered an enormous burden in sending his only Son to be born into our sin-stained world.

But that was the only way he could build relationship with his earthly sons and daughters. By giving us the gift of free will—which, thanks to Adam and Eve, we wasted no time unwrapping—he also allowed us to live in a world that suffers from our selfishness and sin. He tried the direct approach, but his people just kept wandering away from him, always looking for ways to get what they wanted—idols, power, and deceit, the same things that drove Habakkuk crazy.

So it wasn’t fair. A perfect, holy, and just God found himself separated from his imperfect, earthly, sinful creations. By sacrificing Jesus—his own Son—God created a bridge that allows us to know him, to be forgiven of our sins, and to be remade in the image of Christ. But in order to give up his Son (again, not fair), God had to first allow Jesus to suffer in a way that must have felt unbearable to God as a Father, reminding me again of that excruciating decision Sophie had to make.

Philip Yancey, one of my favorite authors on this topic, in his book Where Is God When It Hurts? explains God’s motivation in making such a sacrifice: “To some, the image of a pale body glimmering on a dark night whispers of defeat. What good is a God who does not control his Son’s suffering? But another sound can be heard: the shout of a God crying out to human beings, ‘I LOVE YOU.’ Love was compressed for all history in that lonely figure on the cross, who said that he could call down angels at any moment on a rescue mission, but chose not to—because of us. At Calvary, God accepted his own unbreakable terms of justice. Any discussion of how pain and suffering fit into God’s scheme ultimately leads back to the cross.”

When people ask why bad things happen to good people, we need to realize that the worst thing happened only once. And Jesus volunteered for it.

When we’re busy complaining about how life is so unfair, we usually forget that God is also totally unfair. Yes, you read that right.

Not only is life unfair, but in this case God is unfair. To be clear, he’s never unfair according to his standards, but he’s certainly unfair according to ours. And that’s good news for us. Because if he were fair (according to our understanding), then none of us would stand a chance. We are all guilty of sin. We’re inherently selfish, both in small, subtle ways and in bold, dramatic ways. When we commit adultery or murder in our hearts, to God we’re just as guilty as those who are exposed and convicted of the same acts. At least, that’s what Jesus said.

If we got what we deserve, then we would be stuck with ourselves, with no hope of change, no hope of forgiveness, no hope of eternal life in heaven. Just the torment of regret, the terrible loneliness of knowing that we got what we thought we wanted—to refuse God’s grace and be left alone. We would lose our souls to our own selfish pursuits.

Certainly, in Habakkuk we see someone—in this case God’s own prophet—asking the hard questions. The Hebrew word used to describe Habakkuk’s message is massa, which means “an ominous utterance, a doom, a burden.” Maybe just by his willingness to name the elephant stomping around the room, Habakkuk begins the process of rebuilding a stronger faith. And what does he use? Not just a simple prayer over his dinner but an ominous utterance, a doom, a burden. Sometimes the way back to God isn’t a smooth road; it’s a road paved with bumps and land mines. But God offers us his Spirit to guide us, lead us, direct us through the maze of doubts and back to the safety of his presence, nature, and goodness.

What if honestly acknowledging your doubts, as Habakkuk did, is your first step toward building a deeper faith? What if embracing your secret questions opens the door for a maturing knowledge of God’s character?

What if drawing closer to God, developing genuine intimacy with him, requires you to bear something that feels unbearable? To hear him through an ominous utterance, to trust him in the moment of doom, to embrace his strength when you’re weak with a burden? What if it takes real pain to experience deep and abiding hope? 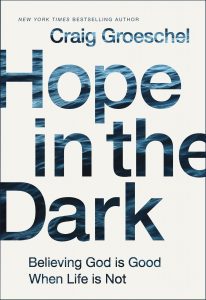