I’ve been a pastor in Washington, DC for more than 20 years. I have seen administrations come and go. The party in power one day is shown the door the next. Yesterday’s hero is today’s scoundrel. Often it can feel that way in ministry. One moment everyone is praising your latest sermon; the next minute, there are complaints about the latest program or ministry initiative. It can feel like a battle, a battle for your congregation and a battle for your personal pride, a battle for your confidence in God’s people, even a battle for your own soul.

We are all in a battle. We are born on a battlefield between good and evil. We must choose sides, and then fight the good fight, a fight in which pastors and ministry leaders must lead the way.

“Some want to live within the sound of church or chapel bell,” said missionary C. T. Studd. “I want to run a rescue shop within a yard of hell.” Jesus died to make us dangerous, and for pastors and leaders, the work of being dangerous to the kingdom of darkness always begins at home.

No solider goes into battle unprepared. He spends time in training. He checks, rechecks his pack, and cleans his weapons. But too often as pastors, we walk into the fiercest of battles without preparing to face them- The battlefield of ministry is strewn with the wounded and the fallen as a result.

It wasn’t Jesus’ responsibility to wash feet. That job was reserved for the lowest servant. Yet Jesus took responsibility for something that wasn’t His responsibility. Pilate did just the opposite, washing his hands as a way of saying, “I’m not responsible.” In the words of C.S. Lewis, “Pilate was merciful till it became risky.” Simply put, Pilate was a people pleaser.

Is there a situation where you have absolved yourself of responsibility by washing your hands instead of taking responsibility and washing someone’s feet? If so, there is a dangerous weakness in your ministry. Before you head into battle, check your gear.

No one would think of dropping soldiers into enemy territory without a guide, in the same way, we have to be sure to set our own moral compasses before we head off to storm the gates of hell. Our moral compass, our conscience, is our spiritual operating system- hardwired into the human heart- and it requires constant updating and upgrading. The way you do this is by downloading Scripture on a daily basis for your own spiritual growth, not just in preparation for teaching and preaching! When you study Scripture, you’re uploading God’s good, pleasing, and perfect will. Then you let your conscience be your guide—a conscience informed by the Holy Scriptures and fine-tuned to the still, small voice of the Holy Spirit.

27,574 weapons were recovered after the Battle of Gettysburg… An astonishing 24,000 were still loaded.

Most of the soldiers died with unfired weapons in their hands. There were several factors at play resulting in this almost unbelievable occurrence, but at least part of the time the unreliable rifles simply failed to fire. Today’s weapons are much more reliable, but soldiers still take the time to carefully clean their weapons before battle.

How much more vital is confession to a Pastor’s soul?

Here’s the reality: most of us haven’t spent more than six minutes confessing sin. In fact, we usually take about six seconds: Lord, forgive me for everything I’ve ever done wrong. Amen.

If you really want to be courageous, try writing your confession. I’d encourage you to destroy that piece of paper after you’re done confessing, but it might help you identify the specific thoughts, behaviors, and attitudes you’re trying to change.

If you want to exercise even more courage than that, confessing your sin to a trusted confidant. I know this can be risky for those in ministry, but doing so invites someone else into your problem. Who knows, maybe they’re part of the solution. Over the years, I’ve heard quite a few confessions from men in particular who struggle with lust, pride, greed, and anger—just like I do. I can honestly say that my respect for the person confessing has never gone down, regardless of what they’ve confessed. In fact, my respect for them goes up. Why? Because it takes moral courage to confess your sins—the kind of courage that prepares us to lead our churches into enemy territory.

Jesus said, “I will build my church, and the gates of Hades will not overcome it.” Translation: we win! But you wouldn’t know it by the way some people fret and fuss. There is no place for a defeatist attitude in the kingdom of God.

I recently had dinner with the pastor of All Saints Church in Worchester, England and he shared the history of All Saints Church. Their church building dates all the way back to AD 680, and their current Anglo-Saxon church was built on top of a Roman church that was named after Emperor Constantine’s mother, Helena. It’s been continuously worshiped in for more than thirteen hundred years!

That pastor has a much longer view than I do, and I think that makes him less nervous. God’s kingdom has been coming for two thousand years, and it cannot be stopped. The kingdom of God has survived every threat against it, and is advancing faster than ever before. By the most conservative estimates, a hundred thousand people around the globe put their faith in Jesus Christ every single day!

So, take heart and lead on with courage right up to the gates of hell itself…

Mark Batterson is the New York Times bestselling author of The Circle Maker, The Grave Robber, A Trip Around the Sun and If. His latest book is Play the Man: Becoming the Man God Created You to Be (Baker Books, May 2017). He is the lead pastor of National Community Church, one church with eight campuses in Washington, DC. Mark has a doctorate of ministry degree from Regent University and lives on Capitol Hill with his wife, Lora, and their young adult children, Parker (21), Summer (19) and Josiah (15). 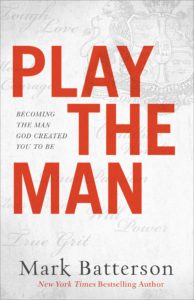 BIBLE STORY: PAUL AND THE END OF THE STORY
twelve:thirty media