Struggling to help children embrace the Bible? The best way to teach something is through story…

Christian parents and leaders know that the Bible is so important to all of us. They also want to pass on that importance to future generations.

But it can be a struggle knowing how to help children to embrace the Bible.

Experts say that the best way to teach something is through story. Memory expert Ed Cooke says that stories are an important part of how come to understand something.

“Understanding and memory are intertwined,” Cooke writes. “Whether we wish to learn a set of direction, a recipe, the events during an historical epoch or the members of the cabinet, imposing a story line over what you wish to learn is a wonderfully simple way of binding the ideas together in a manner that allows easy and enjoyable recollection.” (Source: “How story lines aid memory”)

Of course, it’s how we’re made. God created us to respond to and remember stories.

“Our brains seem uniquely adapted to making sense of experience through stories,” notes Bible teacher Dr. Adriane Leveen. “We tell stories and listen to them not just in our daily conversation but on the news, in the movies, and in novels. Even a sacred text such as the Bible seeks to make sense of the world through stories.” (“Storytelling in the Bible,” The Jewish Bible: A JPS Guide, Jewish Publication Society)

During His ministry on earth, Jesus always used stories to teach the crowds. But He was also mindful to tell stories that made sense to the people listening in the audience.

“When Jesus taught, he used the language of the common folk,” notes minister Samuel Poe. “The vast majority of those listening to Jesus would not have been literate, but even those who were literate found themselves captivated by his stories. The most wonderful thing about his stories was that they revealed realities of the Kingdom of God to those whose hearts were open.” (Source: “The Value of Storytelling–Jesus the Storyteller”) 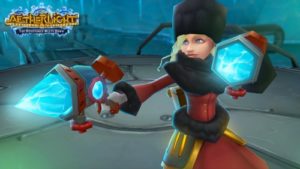 Recognizing that today’s kids are growing up a world of digital connectivity, Scarlet City Studios knew they had to create a Bible-teaching tool that would speak the Bible in a language these kids would understand. As such, the company created The Aetherlight: Chronicles of the Resistance.

Retelling the historical events of the Bible in a new context isn’t new. Two popular examples are C.S. Lewis’ The Chronicles of Narnia and the many VeggieTales retellings of classic Bible adventures.

In the case of The Aetherlight, the stories of Scripture are recast through an exciting steampunk world filled with quests, puzzles, crafting and more.

“We have taken the greatest story ever told—the story of the God of the Bible and his relationship with humanity—and built an allegorical world that is truly epic,” says Scarlet City CEO Carl Becker. “Our hope is that this brand-new expression of the biblical narrative will help them to see their own world—and their part in it—through new lenses, with greater hope and a richer sense of meaning.”

Tim Cleary, a former youth pastor who now serves as a “world builder” for Scarlet City, notes that this digital generation wants to participate rather than consume content.

“Games give you that opportunity,” Cleary says. “We’re able to let you ‘feel’ the story—making it an experience less likely to be forgotten, or simply filed away. The Aetherlight allows the Bible to occupy a place in their imaginations, not just a place in their brains.” 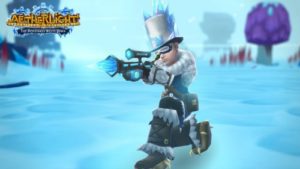 The latest installment of The Aetherlight is “Episode 3: The Resistance Melts Down.” In this episode, Jefferson and the Resistance explore the vast tundra of the Snowmoors as they face the threat of a global catastrophe. Players will need all their courage and cleverness to uncover the secret of the Snowmoors while dealing with rogue automaton monsters, Academy Automicus agents and a cast of new characters that have their own plans.

Regular emails keep parents updated on how their child’s progress in the game. Companion materials and devotionals help young players explore the stories, contexts and meanings of the Scriptures. Through them, players are challenged to embrace the message of the Bible and find ways to incorporate it into their daily lives.

“We set out to create a game experience that would retell the story of the Bible in a way that resonated with 21st century kids,” Cleary says. “That mission is far from over, but we are well on our way. Come and get lost in the Snowmoors!”

HONEY IN THE ROCK
Playback Media