Hit preteen game “The Aetherlight” releases a second episode with new locations, new weapons, and new characters—even as it continues to draw young players into the Old, Old story.

The fledgling Resistance has set out to power more of the Great Engines around No Man’s Landing. They need to enlist the help of two volatile brothers, racers in the Aethasian underground Airship Racing League. When the racing partnership falls apart, a new team will be needed to get the Resistance in the air by any means necessary. It’s a race against time to retrofit a new ship that’s stranded on a floating pit stop with airship racers, swindlers, and a serious goat problem!

The Resistance Takes Flight is the second episode of Scarlet City Studios’ hit preteen adventure game The Aetherlight: Chronicles of the Resistance. This new installment retells the biblical story of Jacob and Esau as an allegory in the ongoing epic adventure to save the world of Aethasia.

At first glance, The Aetherlight: Chronicles of the Resistance looks like it’s merely an exciting web-based adventure game. But it’s so much more: Scarlet City Studios, a small New Zealand-based gaming studio, has reimagined the epic tale of the Bible as a steampunk, allegorical story that’s entertaining, creative—and educational.

The game’s strong biblical themes has attracted partnerships with the American Bible Society and World Vision.

“The allegory is relatively tight,” says Tim Cleary, Worldbuilder and Chief Creative Officer. “The Aetherlight allows the Bible to occupy a place in [players’] imaginations, not just a place in their brains.”

Along with the release of Episode 2 also comes the first full-text Bible for young gamers, The Aetherlight Bible NLT (Tyndale House), a companion Bible themed around the game. The Bible’s features are aimed at reigniting preteens’ imaginations and interest in Scripture through a truly swashbuckling steampunk retelling of the biblical narrative.

Readers will learn to connect the dots between characters they are familiar with from the game and prominent figures and storylines of the Bible. The world of Aethasia is colorful and quirky, and this Bible will carry the same steampunk flair that characterizes the game. 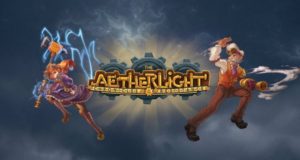 There are 16 “episodes” of the game planned. The first was an allegorical retelling of Abraham’s story, the latest reimagines the story of Jacob and Esau, and the third episode—planned to be released before this Christmas—will take players to a snowy world where they experience Joseph’s story.

“We want the biblical story to inspire and relate with young people all around the world,” Cleary says. “We want them to realize it’s not a book of segmented and broken stories, but it’s a comprehensive narrative with Jesus at the center of the story.”

Jesus is represented in the game by a scarlet-cloaked Savior whose face is hidden. The Scarlet Man leads players deeper into the Resistance where they fight against evil and learn more about God’s Word.

And, ultimately, reaching kids with the Gospel has been Scarlet City’s plan all along.

The Aetherlight: Chronicles of the Resistance is available for PC, Mac, iOS and Android. Find more information online at: https://parents.theaetherlight.com/?referrer=salempubfeaturedstory.