This article originally appeared in the Fall 2016 issue of Preaching magazine. Click here to subscribe and have the magazine delivered to your door!

Scott Gibson is the Haddon Robinson Professor of Preaching and Ministry at Gordon Conwell Theological Seminary in South Hamilton, Massachusetts. Scott is also director of the Haddon Robinson Center for Preaching and directs the DMin Program in Preaching at Gordon Conwell. Scott has written several books, most recently Should We Use Someone Else’s Sermon: Preaching in a Cut and Paste World, from Zondervan, and Preaching With a Plan: Sermon Strategies for Growing Mature Believers from Baker. His most recent book, for which he served as editor, is Preaching Points: 55 Tips for Improving Your Pulpit Ministry. He was interviewed by Preaching Executive Editor Michael Duduit.

Preaching: Tell me about the new book Preaching Points: 55 Tips for Improving your Pulpit Ministry, which is published by Weaver Books. How do you compile 55 tips for better preaching and how many did you have to leave out?

Gibson: We left out a couple hundred or more. We [Gordon-Conwell’s preaching faculty] have a podcast called Preaching Points. Preaching Points is done weekly, and folks wanted to see these preaching points in print. We could not do the several hundred that we have done [on the podcast], but I asked those who had been part of the Preaching Points podcast to see which ones they would suggest.

It was actually Weaver Books’ idea to say, “Let’s add this subtitle of 55 tips to improve your pulpit ministry,” and I thought it was a great addition. We have various ones from Haddon Robinson, Jeff Arthurs (who teaches with me), Matthew Kim and Patricia Batton, who served as a ranked adjunct for us and teaches mostly at our Boston campus.

Preaching: Do you have some favorite tips from the book?

Gibson: If you talk to any one of us here at Gordon Conwell, one of the things we are so keen on is making sure we understand what the idea of the text is and preach that idea. In fact, the very first preaching tip here is preach the “big idea”; it is from Haddon and emphasizes again and again the importance of zeroing in on the idea of the biblical text and making sure that as a preacher, we preach it. I think as far as a favorite or a preferred one, it’s that one: to preach the big idea.

Preaching: You said you had hundreds of these to draw on. Which one did you have to leave out that you personally wish you could have gotten back in? 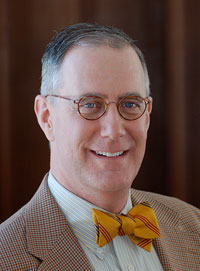 Gibson: There are several that come to mind. One is a preaching point that deals with John Stott’s advice about building the bridge from the ancient world to the modern world, emphasizing how that’s the role of the preacher. We do, as the book title suggests, stand between two worlds. There are other practical kinds of considerations, too, like the way in which preachers articulate and speak.

There are a number of things that we have left out, but we thought that these tips would be helpful for preachers as they think about what it means to preach clearly. Some of them are about going to the Bible to hear God’s Word, and making preaching a priority. You think about the busy life of a pastor and how sometimes administration or the demands of other aspects of ministry crowd in on what we can do, and preaching can become a lower priority, even though it’s something we do every week. Another one is “Don’t get feedback, get feed forward.” These 55 tips will stimulate preachers to think about what it means to be effective, faithful, biblical preachers.

Preaching: You have been teaching preaching for a number of years. What’s different about that task now than when you first started out?

Gibson: One of the things I have seen that has differed is the types of student we have; our students have changed somewhat. The culture has shifted some and there is less of a biblical foundation that students often bring to seminary. There’s a lot of remedial type of work that needs to take place and that leads into preaching.

There is also, perhaps, a lack of recognition of the importance of preaching, and that’s something that we have to wrestle with philosophically and theologically. In the day-to-day teaching in the classroom, the questions often have remained the same in terms of communicating the Scripture’s truth to listeners. There are a lot of things we can take advantage of [including] technology in its various forms, whether it is on the web or recording sermons through video. What we are trying to do is teach a skill that is informed by biblical studies, theological studies, historical studies or practical ministry studies, so preaching brings everything together.

This is my 25th year of teaching. Whether it’s the 25th year or my first year, it has often been the case that students arrive thinking, “I know how to do this.” It takes a while for them to realize that they are not so convinced that they can actually do it. It’s not just standing up and shooting from the lip. It takes a real, thoughtful convergence of all these things about which I spoke to be able to communicate God’s eternal Word to people and to be used by Him to help them to see what it means to become more and more mature in Christ.

Yes, you have technology that changes. There are other considerations, that are there, but you still have students and professors and students and congregations and the importance of these students realizing that they have an incredible responsibility to communicate the Word.

Another thing comes to mind that we have added. Because of our culture and the lack of exposure that some students have, one of the things we talk about in our preaching class at the beginning is the importance of character. One’s character is shaped and molded by the submission to and appropriation of God’s Word and teaching in his or her life. And there’s also the matter of being in relationship with someone who is discipling them and encouraging them to become the person God has called them to be. That’s something we have put more emphasis on. It’s not just the task of preaching, the mechanics of preaching; it also has to do with the person’s spiritual suitability to preach.

Preaching: You occupy a chair that’s named after Haddon Robinson. I know he was your colleague for a number of years. What would you say about Haddon’s contribution to this world of homiletics that we live in?

Gibson: I owe an incredible debt to Haddon for the opportunity to be where I am today. I was hired back in 1991 to fill in for a professor who was struck with illness and never returned to the classroom. Then Haddon came that same year, the second semester. The question was: Was I going to go or was I going to stay? I was only hired for that year, and then Haddon said he wanted to work with me. I didn’t know him. I knew of him and his immense reputation. That began 22 years of working together, which has shaped my life in all kinds of ways, not just in the world of homiletics, but personally. He is a giant in all aspects of life, an incredible person.

His contribution to homiletics is one that can’t be overlooked, especially for the evangelical wing of the church. Haddon Robinson’s Biblical Preaching, published in 1980, was a foundational turning, a shift to a real commitment to biblical preaching. That has had an impact in North American and worldwide homiletics. His book has been translated into numerous languages. In a sense, he set the bar high, [asserting] that sermons are to be biblical and they are to communicate what the Bible has to say to men and women and boys and girls. He did that with excellence and with incredible commitment.

Preaching: Haddon is the one that popularized the term the “big idea” as the foundation of a biblical sermon. How has that helped shape evangelical homiletics over the last 20 to 30 years?

Gibson: Well, it certainly has pushed to the forefront the expectation that the biblical idea is to be the sermon idea – that the sermon is not to be a separate type of thing from the text, but the sermon is to be based on the text. The text is not just a springboard to say what we want to say apart from it. It is emphasizing that there is an idea from the text.

Not only that, it’s also underscoring the importance of clarity—that the sermon has one clear idea that can be communicated by the preacher, but that idea is rooted in the biblical text. It has helped evangelicals to think about the responsibility to preach biblically. You see numerous folks who have written from various angles on what it means to communicate God’s word in a clear idea, otherwise known as the “big idea.”

This article originally appeared in the Fall 2016 issue of Preaching magazine. Click here to subscribe and have the magazine delivered to your door!